Well, this is just as exciting as the Dalton Highway because guess what? More driving, that’s what! And my parents wouldn’t even let me drive on this road. Yes, however exciting it is to ride in the back of a car, trying not to throw up, while watching the same three movies 40 times each, I would much rather do something more fun, like a nice swim in a volcano or maybe feeding my leg to a shark. To add to the boundless fun we had, we got a flat tire and had to change it; luckily, we got to a pull-off before it got too bad ( one of my brothers had to use the bahn-yo ) and made dinner for ourselves and some mosquitoes while we were at it. 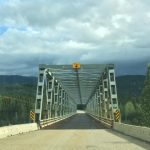 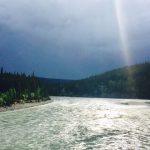 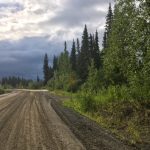 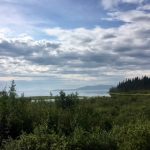 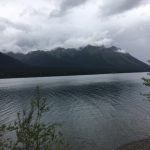 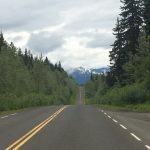 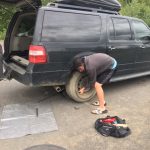 Side note: In reality, there are lots of bears and abundant wildlife right along the highway and the drive isn’t all that bad, except for some spots where the road isn’t paved. Also, the farther south we got, the darker the night got. That was an odd sensation having adjusted to the land of the midnight sun.

My advice: drag a trailer with lots of extra gas, a chariot, six tires, and an entire repair crew (No horses necessary because you can probably find some bears). We also started getting re-acclimated to our school sleeping schedule and got about three hours of sleep one day in a parking lot; the only thing missing was my bad Spanglish and a broken roller coaster project. 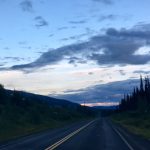 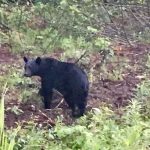 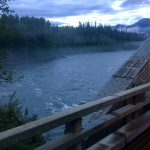 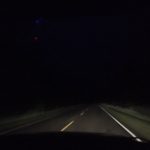 This was one of the most beautiful drive we have ever taken. It is obviously shorter than the ALCAN and is much narrower, but does not differ all that much in the condition of its “pavement”. The Cassiar highway is 543 miles (874 km) long, stretching from the Yukon territory down to British Columbia, passing through many small towns, many of which are generator-powered; I found this fact fascinating. While the highway is longer than the Dalton Highway, it is in much better shape allowing for faster driving speeds…unless you have a flat tire. Our tire saga is growing old by this point. We turned down the Cassiar Hwy in the morning after having sacrificed one tire to the roads of Alaska, feeling fairly confident that our new used tire would get us to Seattle, where we could take advantage of our warranty with Discount Tire. This was not meant to be. Having passed some of the most phenomenal scenery I have ever seen, including bears, lynx, elk, caribou, and a plethora of foxes (both Arctic & red), we decided to pull off the road for a potty stop at a random “airport”: read that as rugged landing strip for the hardcore bush pilots. For some reason, I turned the car off (we normally don’t bother because it’s such a quick stop). That’s when I heard the familiar hissing; no, not a rattlesnake, we’re not in Texas anymore, remember? The TIRE! Again. Now, this was a new (used) tire, not the same troublesome one that refused to serve us on our return trip, but we swear they are in cahoots. God was definitely looking out for us this entire time though, this could have been on the road where there is absolutely no shoulder or right next to the bears or wolves or even just close to the woods, but we happened to have been safely parked off the road in a large clearing with beautiful views and it was still daylight. Thank you, Jesus!!

The boys sprang into action, with Stacey & Sam changing out the tire (I helped a little), and Ben & Wil cooking dinner (I also helped a little), but they really didn’t need my assistance at all, except that someone had to video the whole event, so I know they’re glad I was there to document their chivalry and camaraderie in the face of certain death…or at least as we faced much inconvenience. 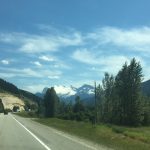 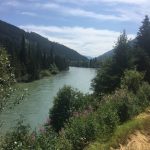 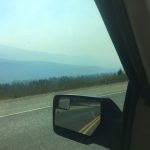 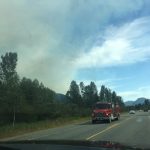 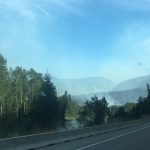 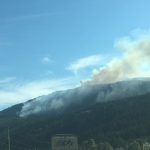 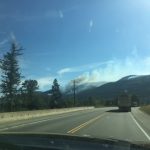 Anyway, our pictures really don’t tell the story of the things we’ve seen on this roadtrip. One notable mention though is the 200+  wildfires breaking out over a week’s time in British Columbia, shutting down some of their major roads and displacing so many people. This is what prompted our early departure (we’d planned to camp at least 5 more days all the way down BC). We were worried that all the roads heading south would close off, so we watched the news reports when we could find cell signal and listened to the stories of fellow travelers at the gas stations and roadside stops to gather news of road closures. As we were driving through the towns that were hosting evacuees, I was reminded of just how strong the human bond really is. So many of the residents of these “towns” are considered hermits, but they came together to take care of the most basic needs of their “neighbors” from 50+ miles away, just like we’ve seen in recent storm events on the Gulf Coast. People can be so awesome when given the chance!