Vancouver was a really cool city, and we went to the Steamworks Brewing Co. (I recommend steaks or burgers) and looked at the cool downtown area before sleeping in an oven with a weird stain on the bottom of the shower, a.k.a. the Grouse Inn (just kidding, we forgot to turn on the A/C and the stain was from washing Willy’s feet). I can’t offer much advice for Vancouver as we only spent one night, but I thought it was really pretty.

From here, we spent an extraordinary length of time waiting to cross the border into Washington (state #49 for the Wilverine, for anyone counting). Luckily, we were not aprehended for a “random secondary inspection”; although, we were a little worried that the border patrol officer might confiscate our Mars bars. It was really touch and go for a minute there; we were ready to fight if it came to that. 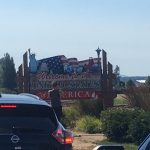 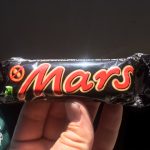 The next place we were super excited to get to was Seattle (especially Wil, although he didn’t know why), but first we met some friends and went to this good Italian food place and went hiking at the Snoqualmie waterfall. 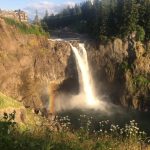 After that we came back to our hotel and woke up at 3 a.m. to realize how messed up our sleep schedule was. After that weirdness, we went to the Pike Market in downtown Seattle and ate seafood at Lowell’s, bought fresh cheese, cheesecake, cherries, and some weird flavored pasta from some vendors.

We also went to the fish vendor where they throw fish at each other. It’s a good thing those guys have such good aim and they all can catch. 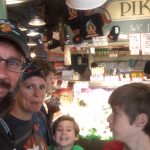 We then went to see the Space Noodle and the literal troll under the bridge in Fremont. 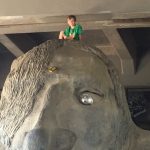 Then we saw a cool houseboat community on Union Lake, and went to the Flagship REI, before going to see Cars 3, which was a good movie, and finally going back to our hotel to get into the pool. Advice: spend time in the Pike Market, but if you want food, eat a little from various vendors; don’t go to just one place as there is too much to try. And spend some time walking in downtown, as it is a cool area.

We are now on our way to Oregon and to see some Giant Trees.

Thanks again to Discount Tire for taking care of our tire issue.