Denali was not at all what I expected. There is literally one road and you can only drive 16 miles without special permission. The other 6 million acres of the park is unmarked trails and/or no trails at all (there were like three trails we saw).  The majority of its space is designated wilderness.

The first day we took an eight hour (round-trip) bus ride and saw some bears, and some rocks, and some bears disguised as rocks, the girl sitting in front of me was very confused about the two, most likely due to my dazzling good looks. My advice at this park is to do what we did and go to Eileson Visitor Center on the bus on your first day, and spend the rest of our days at the park exploring the 16 miles you are allowed to drive, because bus tickets are expensive. 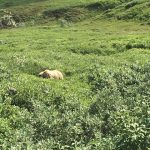 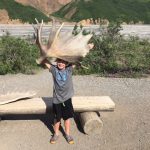 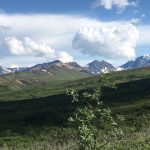 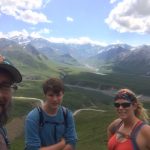 Once we made our stop at the Eileson visitor center, my parents and I took a two-mile hike to the top of a mountain and along the ridge to try to get a glimpse of Mt. Denali and see more rocks and grass, and although I thought it was worth it, due to the snazzy rocks (not very snazzy), my calves disagreed with me. We came back to camp and made a fire then attempted various methods to try and block out the sunlight still shining at 1:00 a.m.

The next morning we vowed to go see the sled dogs, not realizing that we had 30 minutes to walk 2 miles, and that the bus ride was free and took 5 minutes. Advice: Go see the dogs; they’re super cool, but, take the bus to the dog kennels from the visitor center or give yourself about 30 minutes per mile; the trail, although paved, is steep and you just might encounter a delay due to moose crossing.

After making it to the dog kennels, we watched the show, played with the dogs, and then went to the 49th state brewery in Healy (super good food, worth the pricing), and went back to camp to try to sleep. The next morning my dad saw these moose in our campsite, and Ben, (who was sleeping in a hammock), “got attacked” by them-at least that is how he tells the story. 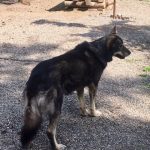 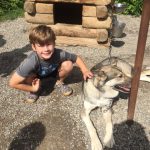 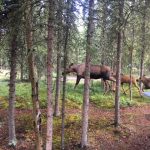 Notes for those going to Denali.

First, this park is great if you are a backpacker and not afraid to go off into the wilderness.  The park has great shuttles that will move you and your group around the park.  The wilderness center is very helpful and where you would go to get a back country permit.  We did not backpack this time as we were a bit concerned about the bears with a 7 year old.  It was probably not an issue as we saw lots of people backpacking all over  the park.   There are a couple camp grounds accessible only by bus / shuttle.  These are perfect camps for backpacker base camps.  Riley campground also has walk in camping that the backpackers use quite a bit.  We camped in the hike in section  in Riley.

Second, if you are not a backpacker, take one shuttle ride into the park and spend the rest of your time exploring the trails and 1st 16 miles of the park you can access via foot or your car.   Horseshoe Lake has a great trail and there are some cool beavers on the trail.  Near that trail there are several other trails that you can take.  Lots of cool trails you can access without using the buses / shuttles.