We made it!
We arrived at the Grand Canyon and saw a herd of Buffalo as we were driving in.

We stopped off and made a picnic at the East Rim.
It is free to camp anywhere on the East Rim – this is not an advertised thing!
Park road 611 – 4 miles before the Grand Canyon National Park entrance.
We camped here about 11 years ago.

See the pic of the boys – view from the East Rim.
Sam – Man what happened to those trees.
Ben – We really worked that big log over and we did not fall in the Canyon behind us, but we almost did. 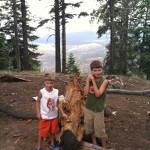 We are staying at the North Rim Camp Ground!
It was about 50 for a low and will reach 85 or so for a high.
We are hiking down into the Canyon today – about a mile.

This place is awesome!

Rio Grande Gorge – forgot to post about this earlier
We stopped and took a peak at the Rio Grande Gorge.
What a view.
Met a hunting guide named Andres and he gave the boys mule deer antlers. 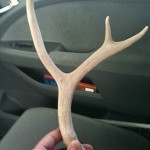 Wrapped up our New Mexico visit after 5 days at the Plaza haunted hotel.
Had friends in room 310 of the Plaza and Byron T paid them a visit at least two times..
He kept turning on the lights in their bathroom!

We are on our way to the Grand Canyon.
Stopped in Tuba City and just short of Page.

We are currently across the street from the DeMotte Campground.
It is about 75 degrees.
Almost to the North Rim. 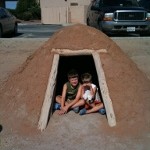 What a cool place!

We went to the Jemez Mountains as well and had a great time!

We are still in Las Vegas, New Mexico until Friday.
We then head to Arizona and the Grand Canyon. Texas the Musical
Sam – It was really good.  I liked Calvin Armstrong – he was cool!
Ben – It was sweeeeet.  I liked all the singing, dancing, and horses.  I like umh umh umh it when the Colonel Henry umh uhm was talking / aguing with Calvin.
The fire on the side of the moutain was cool.
Kelley – I liked the historical aspect and pioneer spirit.
Stacey – I really liked watching the show with my boys and my pretty wife!

The fireworks show was awesome!  We were up close and it was really really loud and intimate / exciting.

After the show, it rained all night and our tent leaked.  Luckily, it only leaked on Kelley and the rest of us were cold and damp, but not soaked.   It was much cooler than the 107 the night before.

We are now in Las Vegas, New Mexico at the Historic Plaza Hotel.
http://www.plazahotel-nm.com/
The boys think it is haunted which is going to make our 5 days very fun.

Wow – hotter than haedes here!  It is roughly 119 degrees in the shade.
Trianchulas are everywhere and they are big, black, and hairy!
Sam and Ben – we almost caught us a Turkey – just like bowling!
Sam and Ben – the plan is to kill a Turkey tonight or a deer – we have weapons ( shovels and hammers ).

Kelley, Paw-Paw, and I went for a hike – Kelley and I turned back at mile 3 as it was 107 degrees.
Paw-paw decided it was time for a run at 12:00 – he gave us the last of his water and off he went
8 miles later – he dragged back up at camp and boy was he thirsty and swollen!
The joys of camping!

Next – we went to the Cadillac ranch – what a cool place to practice graffiti! 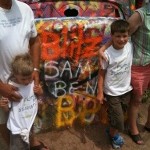 We can smell Amarillo, but no longer can smell Houston.
3 tips for the road – punch buggies, graveyards, and cow patties

Look at those footprints! 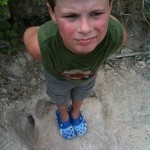 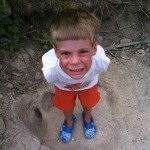